All games will be played at the Go Auto Servus Centre in St. Albert at the following times:

The winner of the series will represent the Pacific Region in the 2017 Esso Cup in Morden, Manitoba on April 23-29.

The Chiefs went undefeated through the tournament (3-0-1), and defeated the regular-season champion Peace Country Storm 4-1 in the final to claim gold.

Girls Hockey Calgary added yet another 2017 Provincial medal to its collection as the Calgary Fire Red earned bronze with a 3-2 overtime victory over host Sherwood Park.

Calgary Fire White’s Danika Stang took home the Midget Elite scoring title with 22 goals and 9 assists for 31 points, while while Red Deer’s Danica Polson and Avery Lajeunesse round at the top three with 29 and 26 points, respectively.

Jayda Thompson of Red Deer finishes the year off on top of the leaderboard with a .970 save percentage. She holds a 10-1-1 record on the season with 6 shutouts. Peace Country’s Paige Jassman leads all AFHL goaltenders in games player with 24 and has an impressive record of 21-2-1. Calgary Fire Red’s Gabriella Durante led all goaltenders with 7 shutouts on the season.

In the race to the Hockey Alberta Provincial Championships, presented by ATB Financial, Red Deer, Peace Country, and Calgary Fire Red won their respective playoff series to secure a spot in the Provincials, as well as the Edmonton Pandas, who narrowly lost their second round series against host Sherwood Park.

The St. Albert Slash celebrate their Midget AAA Provincial Championship after a 2-0 win over the Rocky Mountain Raiders 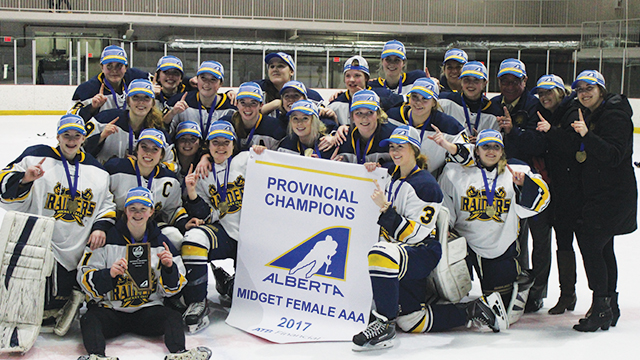 The Slash entered the Hockey Alberta Provincial Championships, presented by ATB Financial, as the AFHL Midget AAA regular season champs, and went wire-to-wire as the league’s top team with a 2-0 win over the host Rocky Mountain Raiders in the gold medal game. The Calgary Fire defeated the Red Deer Sutter Fund Chiefs 3-1 in the bronze medal game earlier in the day. 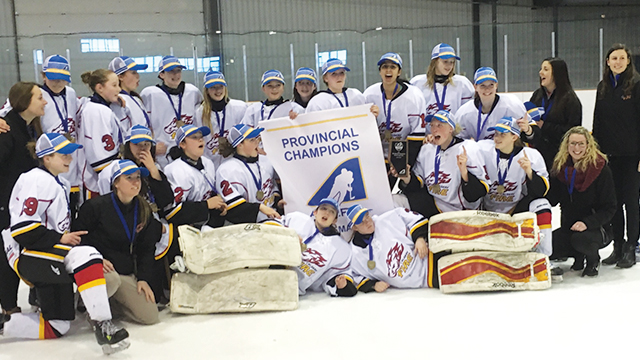 Just like St. Albert, the Calgary Fire White came into the Bantam Elite Provincials as the top team, and cemented their spot atop the league by edging the St. Albert Raiders 1-0 to claim gold. Girls Hockey Calgary earned its third medal of the day, as the Calgary Fire Red earned bronze with a 4-3 over the Sherwood Park Royals.

RED DEER - The Alberta Female Hockey League’s Midget AAA regular season has officially come to a close, and the Provincial Championships for Bantam Elite and Midget AAA kick off on Thursday and Friday.

AFHL Action heated up as the race to the Hockey Alberta Provincial Championships kicked off last weekend. The regular season champion St. Albert received a bye into the tournament, as well as host association Rocky Mountain Raiders.

In the first round series, the third-place Calgary Fire faced off against the sixth-place  Edmonton Pandas and won the two game, total point series by a score of 6-5. The other series featured the fourth-place Red Deer Chiefs and fifth-place Lloydminster in a low-scoring battle. Red Deer skated away victorious as Kaitlin Linnel scored on a rebound to seal the victory for Red Deer on Sunday afternoon.

The inaugural AFHL Midget AAA Provincial Championship will start on Friday morning, March 17 at Scott Seaman’s arena and will feature our top four teams from the regular season; (1) St. Albert, (2) Rocky Mountain Raiders, (3) Calgary, and (4) Lloydminster. If you are unable to make it Okotoks this weekend, you can still catch the games online! The live video and audio streams, as well as updates on scores will be provided on the AAA Provincial website.

The Calgary Fire White (21-2-2) are taking home not South Division crown, but the league’s regular season title as well, although the Northern Division-leading St. Albert Raiders (21-3-4) gave them a run for their money.

Olds’ Sarah Wozniewicz claimed the league scoring title, finishing with 27 goales and seven assists for 34 points.  goals (23) and points (28). Calgary Red’s Emily Straw and North Central’s Chloe Reid round out the top three in points with 31 and 30, respectively.

The road to the Hockey Alberta Provincial Championships, presented by ATB Financial, is now laid out, as the first-round playoff matchups are set. In the North Division, the St. Albert Raiders receive a first-round bye, while the North Central Impact will battle the Edmonton Pandas, and the Peace Country Bonnett’s Storm will take on the Sherwood Park Royals.

Calgary Fire White advance directly to the second round in the South, with the Rocky Mountain Raiders going head-to-head with Calgary Fire Red, and the Red Deer Sutter Fund Chiefs up against the Lethbridge Cyclones. All playoff matchups are two game, total-goal series. The winning teams from each second round series will advance to the Provincial Championship.

The Midget AAA and Midget Elite schedule wraps up this weekend, with playoffs set to start the following weekend