Heading into February, the Midget AAA Female standings are:

Rocky Mountain Raiders forward Nicole Fry heads into the final weekend of play atop the Midget AAA leaderboard with 40 points, while teammates Breanne Trotter and Chloe Puddifant lead the league in goals and assists, with 22 goals and 23 assists, respectively.

St. Albert goaltender Camryn Drever carries the league’s best goals against average, heading into March with a 1.36 GAA, and is tied with teammate Brianna Sank with a .940 save percentage, while Rocky Mountain Raiders goalie Stephanie Gross leads all Midget AAA goalies with 12 wins.

After four months of play, the Midget Elite standings are:

Calgary Fire Red forward Sydney Benko leads the league in goals (30) and points (37), while Peace Country’s Karsyn May and St. Albert’s Annika Neset both lead the way with 14 assists.

St. Albert’s Holly Borrett leads all Midget Elite goaltenders with a 0.92 goals against average, and .950 save percentage, while Airdrie’s Cianna Weir leads the league with with 13 wins.

Sherwood Park’s Jenna Goodwin ended the Bantam Elite season on a strong note, sitting atop the league in goals (24) and points (34), with North Central’s Jacquelyn Fleming leading the way in assists, with 16.

Alexandra Kieren wrapped up her outstanding season with Calgary White, leading the way with a 0.92 GAA, a .950 save percentage, while North Central’s Laney Pasemko is the regular season leader in wins with 15. 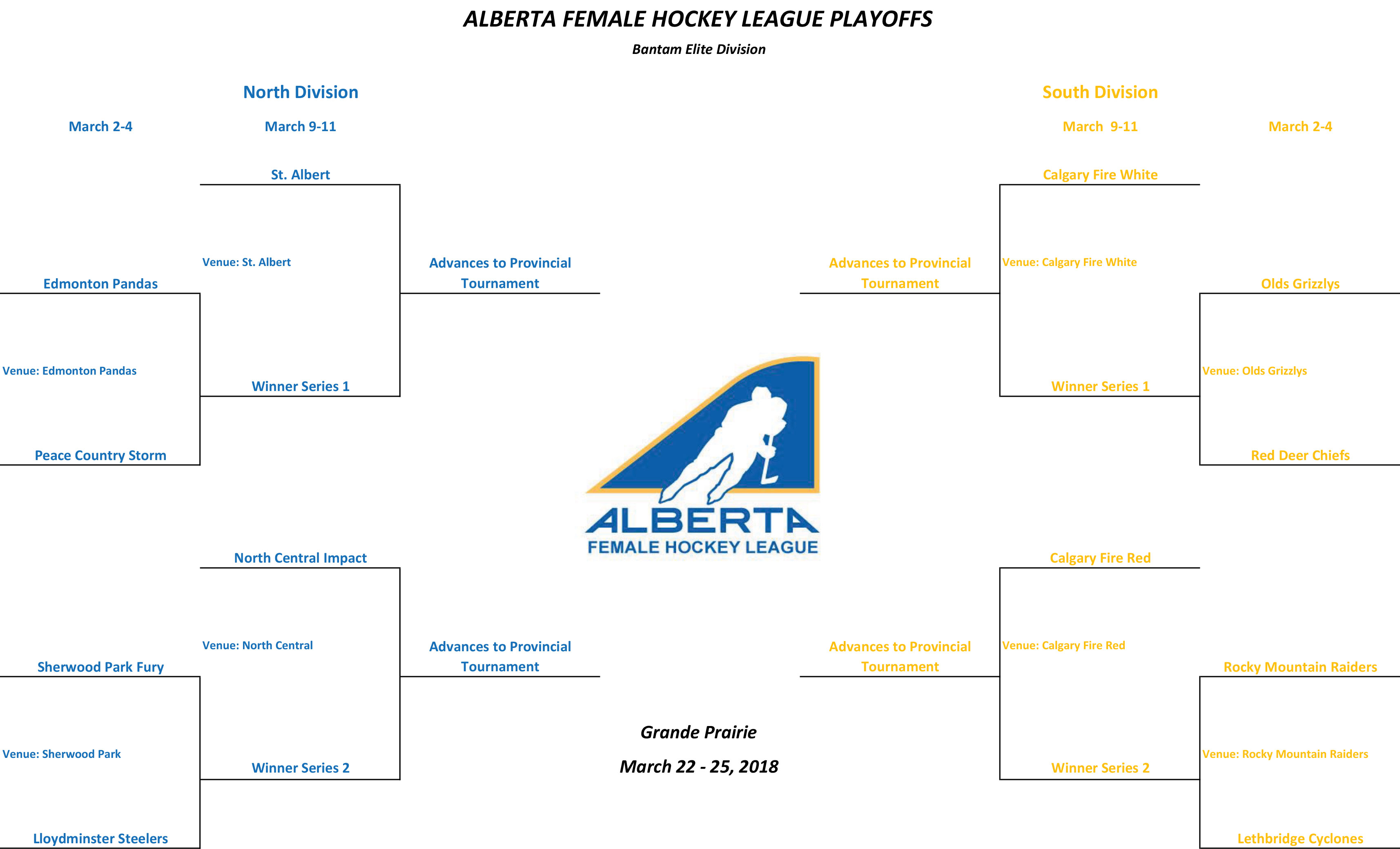 RED DEER - The Alberta Female Hockey League season officially comes to a close this weekend, as the last weekend of the Hockey Alberta Provincial Championships, presented by ATB Financial, get underway on Thursday.

The first game of the tournament goes Thursday at 10:30 a.m. between the Calgary Fire Red and Airdrie Lightning. The St. Albert Sharks and Sherwood Park Fury round out the five-team tournament pool.

All scores, schedules and stats can be found on the Hockey Alberta Midget Elite Provincials site. The scores will also be displayed on a ticker at the top of hockeyalberta.ca and afhl.ca.

RED DEER - The Midget AAA and Bantam Elite Hockey Alberta Provincial Championships, presented by ATB Financial, saw a pair of repeat champions this weekend, as the St. Albert Slash and Calgary Fire White skated away with their respective league banners.

The St. Albert Slash won its second-straight Provincial title in dramatic fashion, defeating the Rocky Mountain Raiders 3-2 in overtime. Trailing 2-1 with time winding down, Madison Willan scored for the Slash with 7 seconds remaining to force overtime. After killing a full two minute five-on-three Raiders powerplay, the Slash got a powerplay of their own, and Mckenzie Hewett scored to seal the win for her team. 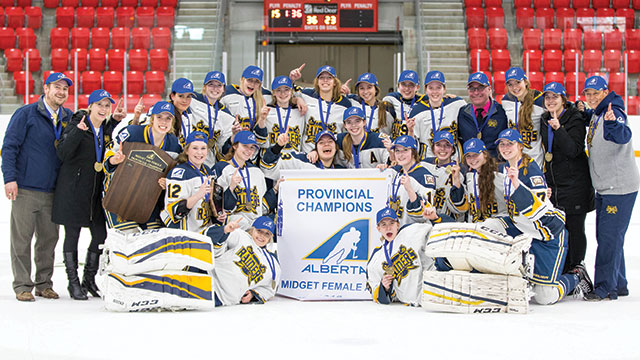 The Slash will now headed for a Pacific Regional rematch with the Greater Vancouver Comets, who they defeated last year en route to an Esso Cup championship.

It was a close game in the Bantam Elite Championship Final as well, with the Calgary Fire White edging the North Central Impact 2-0 to claim its second-straight Provincial title. Calgary got goals from Ashlynn Stitt and Payten Evans in the first and second periods, and goaltender Alexandra Kieren shut the door to clinch the title. 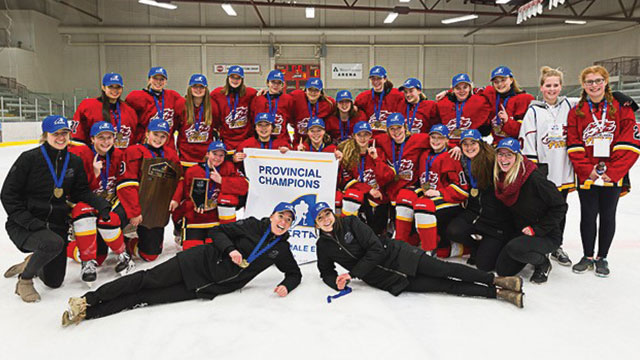 Close games were the story of the weekend, as the host Peace Country Bonnett’s Storm held on for a 1-0 win over the St. Albert Raiders to win the Bantam Elite bronze medal.

The Alberta Female Hockey League season officially comes to a close this weekend as the Midget Elite Provincials take place in Calgary on March 29 - April 1.

RED DEER - The battle for province-wide supremecy is on in the Alberta Female Hockey League, as the Hockey Alberta Provincial Championships, presented by ATB Financial, begin on Thursday in the Midget AAA and Bantam Elite divisions.

The Bantam Elite Provincials kick off Thursday morning at 11:15 as the St. Albert Raiders take on the North Central Impact. The Calgary Fire White, Rocky Mountain Raiders, and host Peace Country Bonnett’s Storm round out the Bantam Elite provincial pool.

All scores, schedules and stats can be found on each league’s respective Hockey Alberta Provincials site, which can be found below. The scores will also be displayed on a ticker at the top of hockeyalberta.ca and afhl.ca.

Kamyrn Oddan of Clandonald and Emilie Morin of Enoch were selected out of more than 25 applicants to attend the international event. Two female hockey players from each province are headed to the Global Game, which will see 37 IIHF member organizations hold events across the globe this weekend.

Oddan is a 15 year-old forward with the Vermilion Female Bantam B Tigers.

"I am so honoured and excited to have the awesome opportunity to play in the 2018 Global Game," she said. "It’s so great to have the chance to meet girls from all across Canada who have the passion as I do. My favourite thing about hockey is the fun I have playing with my teammates. I always try to improve and grow, and I think the Global Game is an awesome experience to learn from, while having fun along the way!"

In addition to hockey, Oddan also plays volleyball and badminton, and is involved in her local 4-H club.

Morin is a 13 year-old defender, who currently plays for the Edmonton Bantam A Sabres.

"Hockey is my passion," she said. "I am so honoured to be representing Alberta, female hockey and Indigenous Canadians at the Global Game!"

Outside of female hockey, Morin also takes part in her school’s Hockey Academy, and plays 3-on-3 hockey in the summer, along with softball.

Participants spend the weekend in Toronto participating in skills clinics, listening to guest speakers, visiting the Hockey Hall of Fame, as well as participating in the main event, the Global Game on Sunday afternoon.

About the Global Game

The Ontario Women’s Hockey Association, in partnership with Hockey Canada and the International Ice Hockey Federation, is hosting the Global Game March 10-11 in Toronto. The Global Game embodies the spirit of enjoyment, teamwork, and collaborating with those from diverse backgrounds. This unique game starts on Saturday and will be played in 28 different countries before being handed off to Canada to play the final segment of the game. A cumulative score is kept across all 28 countries between Team White and Team Blue with a winner being declared after the Canadian portion of the game. The goal this game is to unite all females currently playing hockey as one global family.