RED DEER - The second month of the 2017-18 Alberta Female Hockey League is now in the books, with the St. Albert Slash (Midget AAA), St. Alberta Sharks (Midget Elite), and Calgary Fire White (Bantam Elite) sitting atop the standings in their respective leagues.

Heading into December, the Midget AAA Female standings are:

St. Albert goaltender Brianna Sank sits atop the league across the board with six wins, a 0.87 goals-against average, .970 save percentage and two shutouts.

After two months of play, the Midget Elite standings are:

Lethbridge’s Hayleigh Craig leads the league with 16 points, and is tied with Airdrie forward Madison Black and Calgary Fire Red forward Sydney Benko with eight goals, while Peace Country’s Karsyn May holds the lead in assists with eight.

Calgary Fire White’s Sarah Gaiser leads all Bantam Elite skaters with 16 points, while Sherwood Park’s Jenna Goodwin leads the way with 10 goals, and Lloydminster’s Jayde Cadieux is tied with Gaiser for the league leader in assists, with eight.

Alexandra Kieren continues her strong play with Calgary White, with a stingy 0.20 GAA and .990 save percentage in five games, earning a shutout in all four of her wins. Kieren’s counterpart, Kalynah Fong Martin leads the league with seven wins.

Heading into December, the Midget AAA Female standings are:

Red Deer forward Cassidy Maplethorpe leads all skaters in assists (13) and points (24) through three months of play, and shares the lead for goals (11) with Rocky Mountain Raiders forward Breanne Trotter.

St. Albert goaltender Brianna Sank sits atop the league with a 1.30 goals-against average and a .950 save percentage, and is tied for the league lead in shutouts (two) with teammate Camryn Drever, and Red Deer’s Chantelle Sandquist. Drever, Sandquist and Raiders goalie Stephanie Gross all lead the league in wins, with seven each.

After two months of play, the Midget Elite standings are:

Lethbridge’s Hayleigh Craig leads the league with 18 points, while Airdrie forward Madison Black and Calgary Fire Red forward Sydney Benko share the lead with 13 goals each. Peace Country’s Karsyn May and St. Albert’s Annika Neset are tied for the league lead in assists, with 10 each.

Airdrie’s Cianna Weir continues to lead Midget Elite goaltenders with 11 wins. St. Albert’s Cecelia Michelutti’s 0.80 goals against average and .960 save percentage are both tops in the league, while Edmonton’s Josie-Leah Cardinal remains atop the leaderboard with three shutouts.

Alexandra Kieren continues her strong play with Calgary White, leading the way with a 0.87 GAA, a .950 save percentage, and four shutouts. Kieren’s counterpart, Kalynah Fong Martin is tied for the league lead in wins (eight) with Sherwood Park’s Asia Kachuk and North Central’s Laney Pasemko.

December was an exciting month for the Bantam Elite division, as 102 players were selected to play in the 2018 Alberta Winter Games. Click here for the full story >

Hockey gives back across Alberta

Alberta’s hockey community is always at its best during the holiday season, and we’ve asked Minor Hockey Associations and teams from across Alberta to share their stories of giving back to the community with us. Here are a few of the stories from AFHL teams: The Airdrie Midget Elite team teamed up with the Airdrie Atom Female team to purchase turkeys to donate to the local food bank. They raised enough money to purchase 236 turkeys, well beyond their goal of 150. The team also collected 150 jackets and hoodies to donate to those in need in their communities. The Edmonton Bantam Elite Pandas of the Alberta Female Hockey League volunteered as porters at the Santas Anonymous depot, spending several hours bring bags of toys to the drivers. 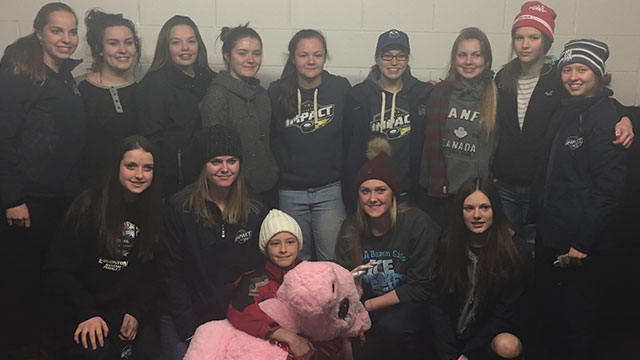 The North Central Impact decided to play Santa’s helpers for a young girl in Thorsby. They secretly took her Christmas wish-list and purchased many of the items for her. She thought she was coming to watch her first every hockey game but was surprised when the team sang her Christmas carols and presented her with gifts from every player. The Olds Bantam Elite Grizzlys of the Alberta Female Hockey League joined in on the Sherwood Park Royals’ "Fill the Net" fundraiser for the local food bank. The Red Deer Sutter Fund Midget AAA Chiefs of the Alberta Female Hockey League hosted a "Fill the Net" food drive for the Red Deer Food Bank during a home game on December 2. The Sherwood Park Midget Elite Fury of the Alberta Female Hockey League, along with other Sherwood Park Kings Athletic Club teams, collected dozens of bags and hundreds of pounds of food with their "Fill the Net" initiative at the annual "Kings Day" on December 2. "Since Steve Mancini started coaching the (Fury), his players and he have “given back”, especially with three years of a weakened economy in Alberta," said Manager Jeff Markowski. "Despite the Strathcona County area being relatively stable, many families are overcome by unemployment, abuse, and medical/health issues that disable their lives in unseen ways. Our local Bureaus and helping agencies are seeing fewer donors and funds come there way with each passing season." "This season, as in past, the Fury players and staff spent an evening at the local Christmas Bureau, finding and wrapping gifts and collecting food for those that would go without," said Markowski. "Just over 30 families this year will be able to enjoy the their upcoming Holidays with a bit less stress on their minds, a few gifts of kindness, and food in their stomachs. Great giving Fury, and thanks for being the terrific young people you are!"

RED DEER - The Alberta Female Hockey League will be well-represented in Fort McMurray in February.

Of the 120 players selected to play in the 2018 Alberta Winter Games, 102 currently play in the AFHL’s Bantam Elite division.

Twenty players comprise each roster, along with volunteers serving as head coach, assistant coach, coach mentor, and director of operations. Rosters were selected based on performances at regional camps held December 8-10 in Morinville and Innisfail.

The Alberta Winter Games is a multi-sport event for developing athletes, aged 11-17 years old. The Winter Games were first hosted in 1976 in Banff, and occur each even-numbered year. The athletes are selected to represent the eight zones in Alberta in 20 sports such as hockey, badminton, gymnastics, skiing

LLOYDMINSTER - What started out as a local initiative for the Lloydmister PWM Steelers, quickly turned into a league and province-wide success story this holiday season.

Project PJ was started by 12 year-old Olivia Brockhoff in 2015, after a friend of her sister, who was going through cancer treatment at the Stollery Children’s Hospital, complained about the pajamas provided to her by the hospital. Now, every year, Olivia collects donations of pajamas to give to the hospital.

Tanya Plamondon, whose daughter plays for the Steelers, brought the idea to the Midget AAA team, and it snowballed from there.

"I’ve known Olivia and her parents for a long time, and I’ve been donating pajamas since she started (Project PJ)," said Tanya. "I wanted our team to do something big this season, so I mentioned it to (Head Coach) Randy (Laumbach), and we went from there. It worked out awesome since we had six home games to collect the pajamas in November, and we collected 89 pairs our first game through all us and our fans. The following weekend, we had the Calgary Fire and Edmonton Pandas accept our challenge to them, which was all in good fun, and the response was great. We also had the Rocky Mountain Raiders accept our challenge." 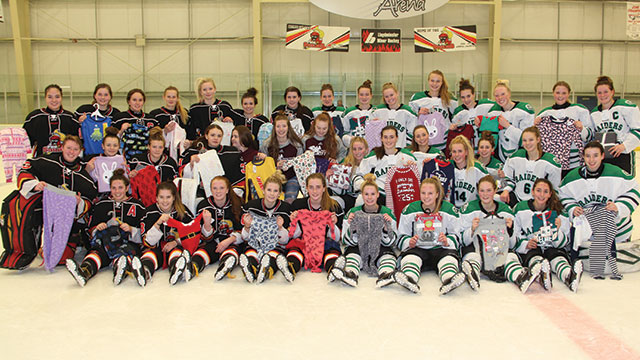 The Fire, Pandas and Raiders collected a combined 140 pairs of pajamas. The captain of last year’s Steelers team, Tessa Mitchell, also challenged her current team, the MacEwan Griffins, to join the cause, adding another 125 pairs of pajamas to the team’s total, which were presented to the team on November 25, with Mitchell conducting the ceremonial faceoff. 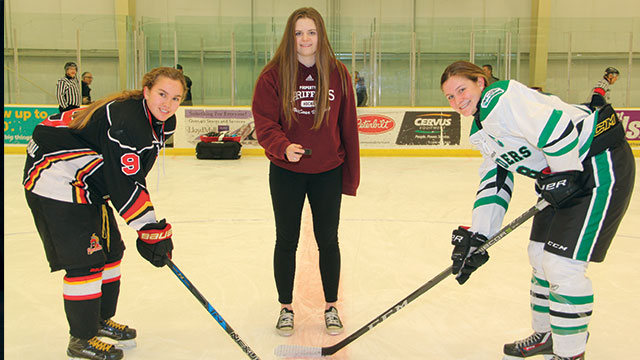 After an incredibly successful campaign for Project PJ, the Steelers managed to collect an astounding 513 pairs of pajamas, which were presented to Olivia during the team’s game on November 26.

As of December 1, Olivia has collected over 1000 pairs of Pajamas through Project PJ, all of which will be donated to the Stollery Children’s Hospital.

Hockey Gives Back - We want to hear from you!

Hockey Alberta would like to showcase all of the hockey teams across Alberta who give back to their community this holiday season. Send your team’s story, along with photos, to info@hockeyalberta.ca to be featured on Hockey Alberta’s website.

December 21, 2017 Hockey gives back across Alberta